skip to main | skip to sidebar

A guy so drunk, he's not allowed in the drunk tank

Well this has been an exciting morning already, with a party happening first thing in the morning. The individual pictured was happy to have his picture taken. 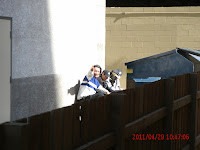 They eventually left, but one of the participants was so drunk that he fell over and couldn't move.   The guy had a gash on his head, and his mouth was black, he almost looked dead. All he could do was turn his head and lift one arm, so I called 911 immediately. The first responders came and told me that this individual was so drunk that he wasn't allowed to go to the drunk tank, he had to go to the hospital. 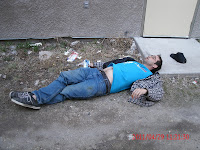 I will be making more police reports about this and tracking each incident as I am able.
Posted by marble5 at 1:23 PM 2 comments:

There were so many people drinking here yesterday at Murdoch's property that I hardly know where to begin with documenting this stuff. So I'll just put up a random sampling of pictures. 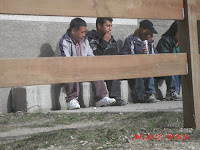 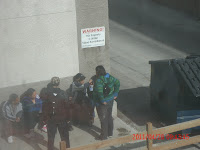 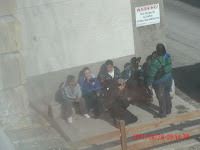 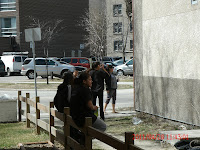 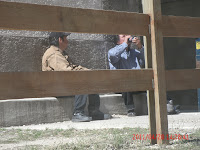 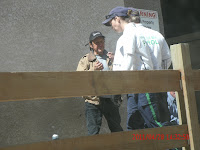 A large group of people partying at 435 Cumberland Ave

These people were intimidating because they told the biggest member of their group to go take my camera away from me, so he came over to near me and started shaking my gate that was standing between him and I. Usually these people don't bother me at all, but this group was intimidating. Also, we observed two different groups of girls coming to this exact same spot to drink alcohol. We have too many pictures, we can't post all of them here. I'll just post the video that I took this evening here: 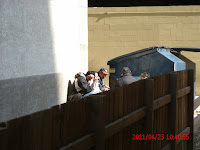 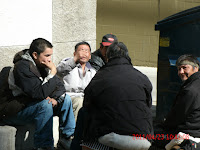 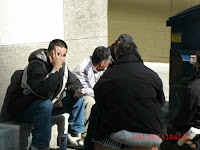 Smoking pot and open liquor on the pad

This year there have been some people who don't bother to sit down on the ledge anymore, now they stand around to drink. This shoots a hole in our plan to ruin the ledge, we were thinking that if people couldn't sit anymore, they wouldn't come to the pad to drink, but I guess that's not the case.

These particular individuals were actually first spotted smoking pot, but by the time I got there with my camera, they were into their King Can. As soon as they spotted my camera, the first guy ducked down and hid behind his buddy. The other two were less interested in hiding. But they all left fairly quickly. 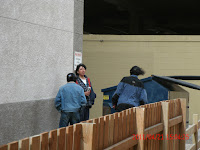 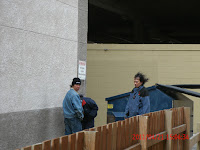 First drinkers of the season on the pad with their beer.

Video of them being chased away by my camera here:
http://youtu.be/n5VOJd40HOU
Pictures here: 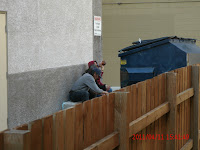 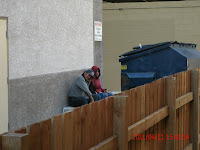 As soon as they saw me taking pictures, the girls put down their 2L beer and pulled their hoodies over their faces.

Murdoch got someone to clean up the dumpster area this morning at 8:30am. Click on the pictures to enlarge them. 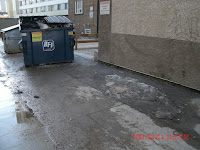 Unfortunately that is the only area where they cleaned up. Their garbage is still blowing down the back alley from their over-filled dumpster. Some of it is visible in this picture, some is not. 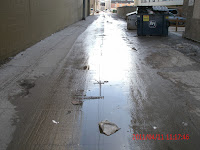 There is a bag of garbage that has been sitting at the east side of 435 Cumberland Ave building for several weeks. It has changed locations slightly, but it still sits there with nobody to take care of it. 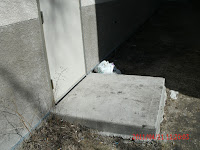 A couple weeks ago, a large truck full of furniture pulled up to the building. Someone was moving, and a table was broken during their move. After moving was complete, somebody left the broken table on the sidewalk for at least a week, beside the main entrance to the building. After a while, the broken table top was removed, but the legs were still left here on the ground. You can currently see them moved aside, but still here on the sidewalk, unattended to. Ben, the manager from Murdoch, was actually on site with someone else who was doing the garbage cleanup. At 8:30am, I specifically observed them making their way to the dumpster, walking right by the broken table legs, leaving them on the ground. This is very discouraging to us, when we see them put in minimal effort like this. 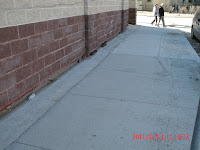 There continues to be garbage spread throughout the thoroughfare on the east side of their building, that was thrown there by people walking through, and blown around by the wind. We go out approximately three times each week to pick up this garbage that ends up on our property. Murdoch does not have anyone who picks up garbage on their property ever, unless ordered to. This is why we are upset at their lack of management of their property. They have told us repeatedly that it is not in the budget. We don't understand this notion that property maintenance and garbage pickup is optional. Garbage pickup and property maintenance is as required as paying the hydro bill, in our understanding. 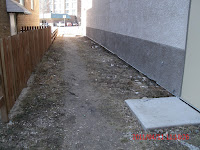 And finally, our first pad visitors were here today, complete with flashing gang signs at me, which I unfortunately missed taking a picture of. We also saw increased graffiti on our fence... only on the 435 Cumberland/thoroughfare side... nobody ever writes on our side of our fence. I won't go over this issue here though, because we have spoken about this issue in depth in our most recent submitted report. 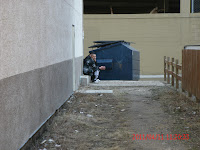 Cleaned up again, but it didn't last long

The garbage got cleaned up shortly after sending the last email to CBES, but it didn't last long. The very next day, there was a pile of wood left in front of the dumpster. That disappeared pretty quickly. Then there was an old TV that showed up April 4th. It was smashed by April 5th, and it has continued to sit there on the ground. 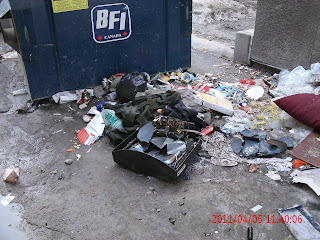 The garbage bags were cleaned up last time, but the filthiest, nastiest stuff is still lying around. 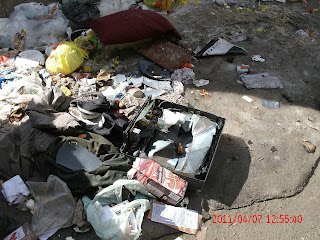